Jump with ↑ W or Space

Duck through platforms with ↓ or S

every single asset (sound, music, art, code) in the game made by us

by Team RotKore (the first game either of us ever made!!)

WARNING: below is a diary of how the programmer felt upon uploading each build of the game. you can see exactly where the desperation kicked in for me lmao

There's not actually a build 10, but I really wanted to say something in this for the first time (not the programmer). Thanks for playing  and we hope you enjoy the game.  :D  -Jknator.

fixed all the bugs and added a splash screen... this is cool

finished up the credits and added the music and sound effects which are AMAZING!! I can't believe this game is real :0

anyway I did a credits screen that I'm happy with and also the game now gets harder as it goes on!!! I think I'm pretty much ready to call this done, just need to add music and sound tomorrow.. uh oh

oops I accidentally did not work on this for like 5 days ahhhh anywayssss I'm back and better than ever. I added a main menu screen and an enemy!!! the movement on the enemy still kinda sucks but I'm gonna playtest and fix it tomorrow hopefully

Okay, I guess I needed some sleep. Here's a tip: if you're spending hours on a bug, go the fuck to sleep, you'll solve it in the morning. Anyway, I finally figured out how to make the UI elements work in different aspect ratios!! the game works on all screens!! I mean it's definitely prettier in 4:3 (how it's meant to be played) but it works on inferior resolutions too <3 <3

the game has a PARALLAX background now (i know right!??!?) and just looks prettier in  general. this was the aesthetic update

EDIT: for some reason on the first run the background looks really ugly, just kill yourself and play again and the background will look as intended. I wonder what that's about... I guess I have another bug to fix tomorrow :,,)

lava has a cool texture now, and it actually kills you!! and there's a brand-new death screen that lets you replay the game without refreshing!!! unfortunately the main menu doesn't exist yet so the button doesn't take you anywhere.

P.S. I closed unity without saving when I was practically finished this build so I had to restart everything UGH

ALSO I HATE UI ELEMENTS. HOW DO THEY SCALE TO DIFFERENT SCREENS? I DON'T GET IT. I SPENT HOURS WORKING ON IT AND THE DEATH SCREEN STILL DOESN'T COVER THE WHOLE SCREEN UIFHAIEFHIUSADFIS

okay okay a buncha bug fixes. movement should be smoother now, no more soaring through the air when you wall jump, and the lava is actually visible now!! I bet you all thought I was crazy last time I mentioned the lava huh? it was there, it was just invisible outside the editor :(

next thing I work on will be the death screen, currently dying is just kinda awkward. oops

testing out the rising stage mechanic. the "lava" doesn't actually kill you yet, but it does make the game impossible to play, so it counts ?

first build of my first ever game jam game, just testing out the movement and apple animation

I really liked the animations for the apple. I was able to get 547 after I realized the pattern repeated and I got used to the wall jump.

Hey. I recorded a video about the Beginners Circle jam and included your game in it. If you want to cut your game out of the video, let me know. However, if you like the video, I make similar videos every day. I will be happy if you subscribe. Anyway, I enjoyed playing your game.

Well, after playing for around 1 hour, there are my conclusions:

The game is fun at the start, and can be addicting. However, I think it may only be addicting to hardcore players like me.

My maximun score is 843, and reaching a 1000  seems to be plausible but extremely hard. What was the maximun score of each member of the team?

What makes it hard to pass the 850 mark is both the speed of the "lava" and how some jumps can be unpredictable.

Overall, I really liked this game and I loved the music.

P.S: Pls get rid of the "pressing down skips a platform" thing, going down in this game is too punishing for that mechanic to be useful. Using down to decend faster seems like a better use for the down button.

thanks for playing so long, and thanks for all the feedback!

Yeah, the game is more challenging than I thought it was hahah, I will definitely keep that in mind for the next game I make. You got much further than most people I showed it to, although I (the programmer and dev) got to around 1250 :P. I'm not sure how far the artist made it, but I think you beat him XD

The lava speeds up slowly as you rise and eventually a single mistake can end the game for you, I think if I were making the game again I would make it easier at the beginning and increase in difficulty more slowly. I also definitely had some problems programming the wall-jumping, and the way it works is a bit confusing

The going down a platform was intended for another version of the game where there were going to be more enemies that came in and the lava wouldn't speed up, so the mechanic made sense. You're right that it's not useful here, and descending faster is a great idea! might just do that today or sometime this week :p

Thanks for taking the time to play and write this all out, it means a lot!! <3

Good name for a game. Luckily I didn't use it myself when thought about it.

These wall jumps mechanics are good. However sometimes it just not working as expected, not sure if it just requires more precision from player.

I've reached something around 500.  Since the platform pattern is repeating itself forever, I could get better at navigating through it, however then it becomes boring.  I guess there's no much entertainment from going from 500 to 1000 (is it even possible though?)

I actually did what you suggest here, making a perfect navigation path, however (for now) my max score is 843. I really wonder if the creator was able to reach 1000. It's quite addicting, so I will keep trying.

thanks! the wall-jumping is definitely weird, with more time I would've tried to make it more intuitive to control. 1000 is definitely really challenging, I guess as the developer it's easy to think your game is easier than it actually is, having practiced and playtested a bunch :p. that being said it is possible, and my highest score in this version of the game is around 1250. 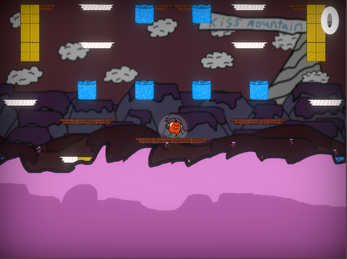 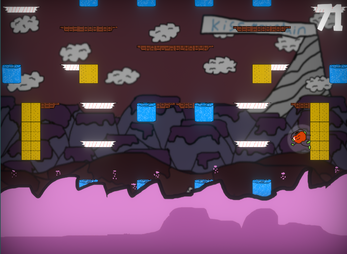 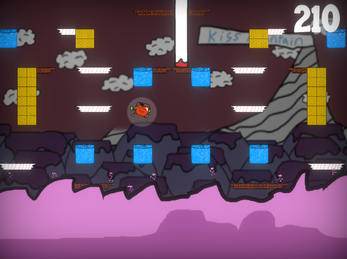